One of the earliest structures built in Santa Barbara, the mission was the tenth in a series founded by the Spanish. Mission Santa Barbara is unusually large and is known as “Queen of the Missions.” It is a beautiful structure that is still used as a church. Full of Chumash Indian and early Spanish settler artifacts, this museum is a prime destination for many visitors to the Santa Barbara area.

Mission Santa Barbara has excellent displays of the life of the Chumash and early settlers, such as a collection of original Spanish settlers’ tools. Especially interesting is a typical bedroom of one of the Franciscan settlers. The bed seems particularly Spartan by current standards.

The kitchen also has a variety of implements that date back to the early 1800s. According to an informational plaque, cooking indoors was typically done by women over hot charcoal. These authentic rooms help to give a glimpse of what life was like in the early days of the mission.

The mission has two fountains, an enormous one in front of the structure, and a smaller one in a courtyard, pictured below. The courtyard contains a garden that was used for prayer and is filled with succulent plants such as hardy cacti and flowering plants that do well in drier climates. Tourists are not allowed inside the sacred garden, but one can sit on benches that surround it and admire the calming view.

The church has an enclosed graveyard associated with it, where Friars and their relatives are still being buried. There are a number of mausoleums, one of which is shown below. Many descendants of the original founding families remain in the Santa Barbara area and wish to be entombed at this site. Also buried in the graveyard are 4000 Chumash Indians. 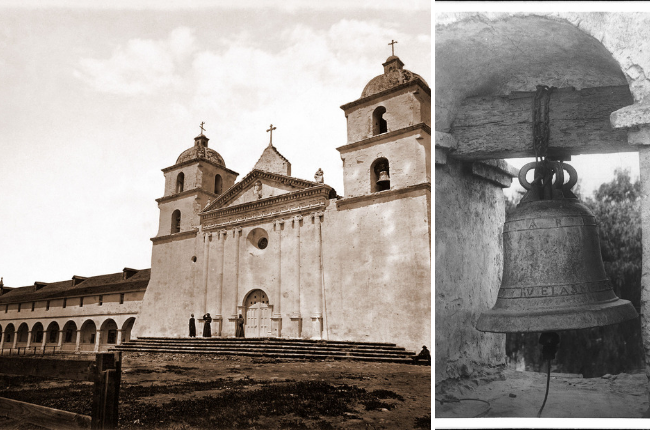 The Mission of Santa Barbara is a remarkable structure that is a popular tourist destination for visitors to the Central Coast and an active parish Church. With a stunning altar, one is forbidden to speak in the area of the building used for worship. The structure is an excellent museum of the life of the early Spanish settlers in the region and also showcases Chumash culture. The flier provided to those who visit the museum is a greatly informative source of information of the history of this remarkable Mission. A trip to this building is highly recommended if one is visiting Santa Barbara.